Vesna was a women's educational association that had been originally established in 1870 as a singing club. Not long after it was founded, it started to focus on educating girls and women in Czech and providing lessons in Czech, history, teaching, pedagogy, and practical handiwork. František Mareš was its long-time director and a capable organiser. The association built its first school on Údolní street and later expanded it to include a building on the adjacent Jaselská street, with decorative interiors designed by the architect Dušan Jurkovič. Vesna soon became a major educational institution, cooperating with various representatives of cultural life - painters, writers, and musicians, including Leoš Janáček, who was a contributory member of the association until 1877, and who gave a number of lectures there, while some of his works were performed at the association's concerts. Janáček's daughter Olga attended the institution and his wife Zdenka helped to organise some of its activities.

Most distinguished gentleman! On the 21st of this month [1889] the "Vesna" women's association performed Lachian Dances as well as Little Queens in Brno. I collected them in the area where I was brought up and set them to music. Thanks to their vigour and charm they were a complete success. This was also written in the reviews.

From a letter by Leoš Janáček to the director of the Prague National Theatre, František Adolf Šubert (February 1889) 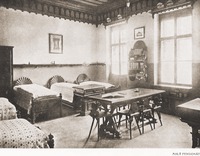 Interior of the Vesna boarding rooms, photograph from the Jubilee Commemoration of Vesna in Brno (1911) © archive JZ
A letter of thanks from the Vesna association to Leoš Janáček for his lectures © Moravian Museum